The private jet industry can be a bit more complicated than consumers may initially think. When you’re in the market to charter a private aircraft, you have more options than simply paying for a service and getting on your jet on the day of your flight. In some cases, you may find yourself wanting to lease a private jet. When leasing an aircraft, you have three main options:

Leasing an aircraft is a great option for many private flyers, but you need to know the differences between these three forms of leasing. In this article, we’ll compare a wet lease vs. a dry lease so you can choose the right leasing arrangement for your unique situation. 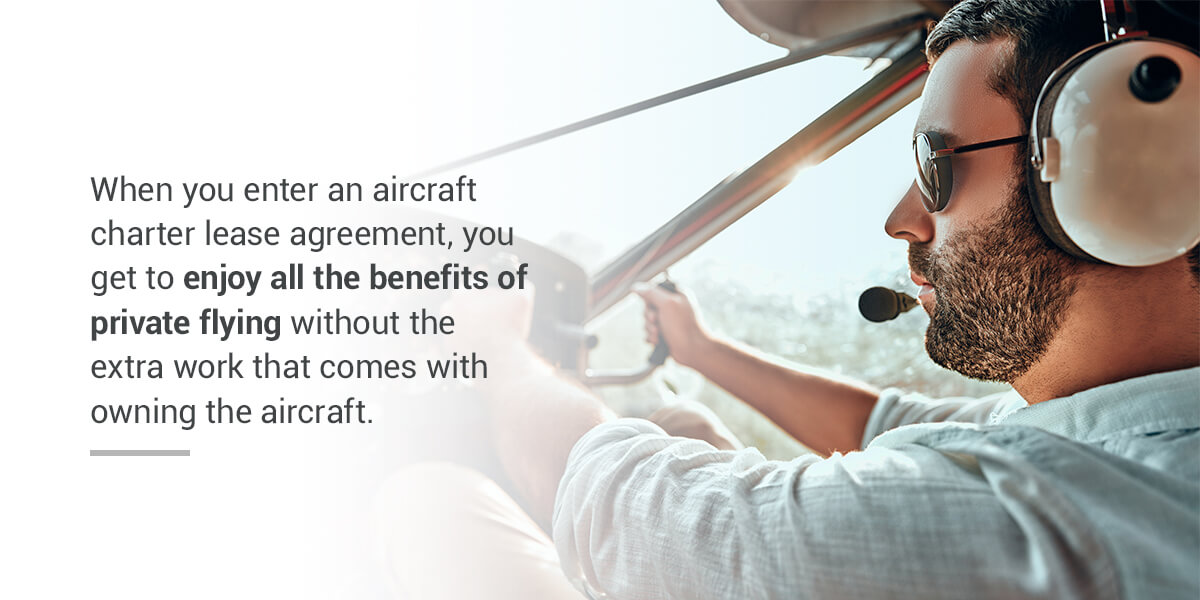 Why Lease an Aircraft?

The first step is knowing why you may want to lease an aircraft in the first place. Some individuals and organizations buy their private aircraft outright, which can be an expensive process. In this scenario, the burden of operating and maintaining the aircraft falls on the owner, which can lead to even more expenses.

But owning an aircraft has its positives. Buying an aircraft gives you operational control over how you use it. When you’re not flying, you can let charter jet companies pay you to use it for their own services. You’ll still have to maintain the aircraft, but you’ll make a lot of your money back via charter.

You can fly yourself, your family, or your employees nearly anywhere at a moment’s notice. Having this freedom can be worth the price of buying an aircraft, but keep in mind you’ll also need to hire a cabin crew and a pilot while paying for fuel, maintenance, and hangar costs.

Buying an aircraft has some benefits but demands a lot of work, time, and money — unless you choose to have an aircraft management company handle all of the logistics for you. When you enter an aircraft charter lease agreement, you get to enjoy all the benefits of private flying without the extra work that comes with owning the aircraft. The owner maintains their ownership of the aircraft, but use of it is transferred to you for the specified time period. Leasing is less of a commitment, but it still gives you exactly what you need according to the lease agreement.

This is why understanding the different types of aircraft lease agreements is so important. You need to make sure the lease agreement you sign aligns with what you need the aircraft for. Get the right lease agreement, and you can enjoy the benefits of flying private within the parameters outlined in the contract. You also want to ensure you’re following all the laws and regulations regarding lease agreements. Below, you can find out more. 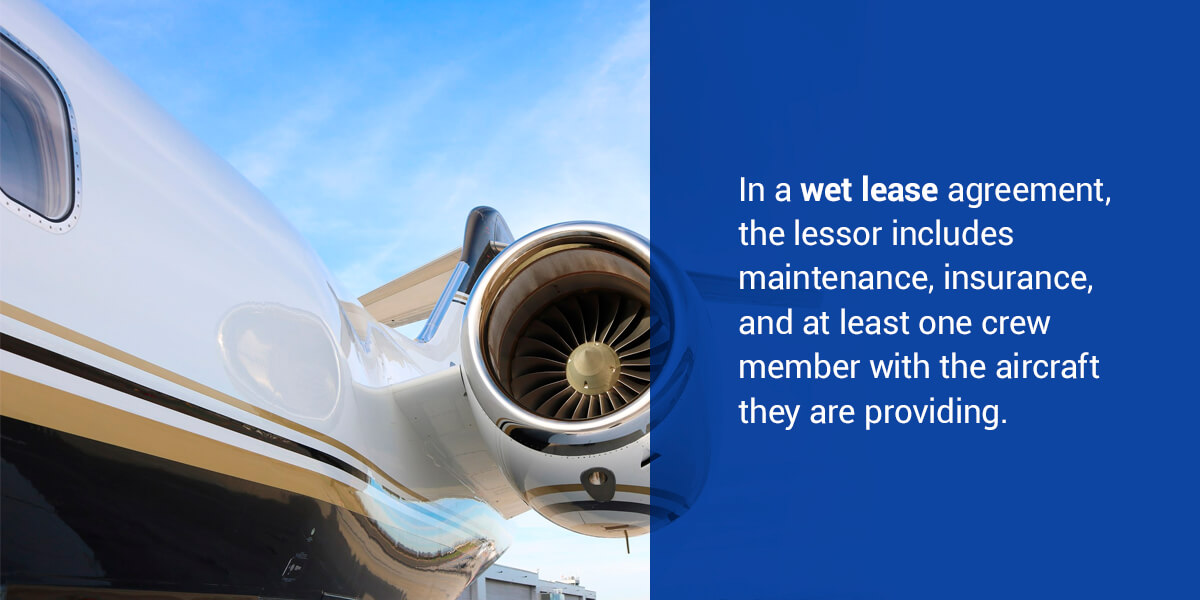 What Is a Wet Lease and How Does It Work?

In a wet lease agreement, the lessor includes maintenance, insurance, and at least one crew member with the aircraft they are providing. The lessee receives this bundle and pays the lessor by the number of hours or the number of flights that the aircraft is operated. The lessee is also responsible for paying for fuel and other expenses, including airport fees and taxes.

The length of a wet lease can last anywhere from a couple of months to over a year. It all depends on the nature of the lease agreement, including how long the lessee needs the aircraft or how many flights they plan on taking. Either way, the lessee obtains exclusive rights to use the aircraft during this period, and the aircraft uses the lessor’s flight number for legal purposes through the duration.

To clarify the characteristics of a wet lease, every wet lease should have:

To make the process official, the Flight Standards office of the Federal Aviation Administration (FAA) requires the lessor to submit a written memorandum of the lease terms — or a copy of the lease arrangement itself — for processing. Once accomplished and approved, the lessee obtains the use of the aircraft according to the terms of the wet lease.

Wet leases are popular for certified air carriers, especially when they want to launch new routes for their clients and lack the aircraft or crew to accomplish this. Aircraft charter operators also make wet lease agreements during peak seasons when they need to transport large numbers of travelers to the same destination and lack on-hand resources. In rare cases, lessees will seek a lessor to fly an aircraft into a location where the lessee lacks permission to operate because of banning or other circumstances.

The Federal Aviation Administration is the governing body that creates the aircraft leasing regulations that lessors and lessees must follow. The FAA’s Dynamic Regulatory System (DRS) is the database containing all the regulations you’d need to know to ensure you’re leasing an aircraft legally, especially when you consider the differences between a wet and dry lease. See the FAA’s page on wet lease agreements for more in-depth information. 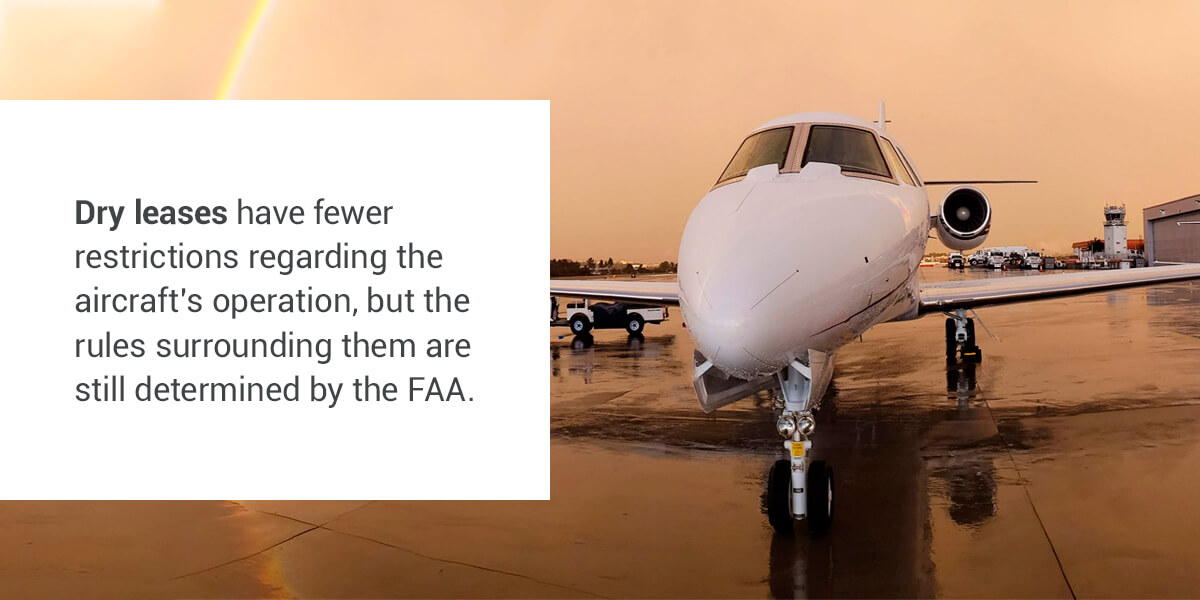 What Is a Dry Lease and How Does It Work?

Dry leases are much simpler than wet leases at face value. This can be both a positive and a negative, depending on your needs and how you intend to use the aircraft being leased. Dry leases have fewer restrictions regarding the aircraft’s operation, but the rules surrounding them are still determined by the FAA. You’ll want to be sure you’re following these regulations, as violating a dry lease agreement still has consequences like violating a wet lease has.

Here are some of the main characteristics of a dry lease:

The above characteristics hint at one of the major benefits of dry leasing — lower upfront costs. The lessee gets to avoid paying for added items from the lessor, including maintenance, crew members, and insurance costs. In a sense, dry leasing is as close as you can get to outright buying an aircraft, without assuming the high costs and other factors that ownership would entail.

Once both parties draft and sign the dry lease agreement, the lessee assumes full operational control of the aircraft and can begin using the aircraft within the parameters of the agreement.

The above sections reveal some of the foundational information needed for understanding the two main types of aircraft leases. Here, we’ll break down the major differences between these leases so you can more effectively know if one is better for your needs than the other. 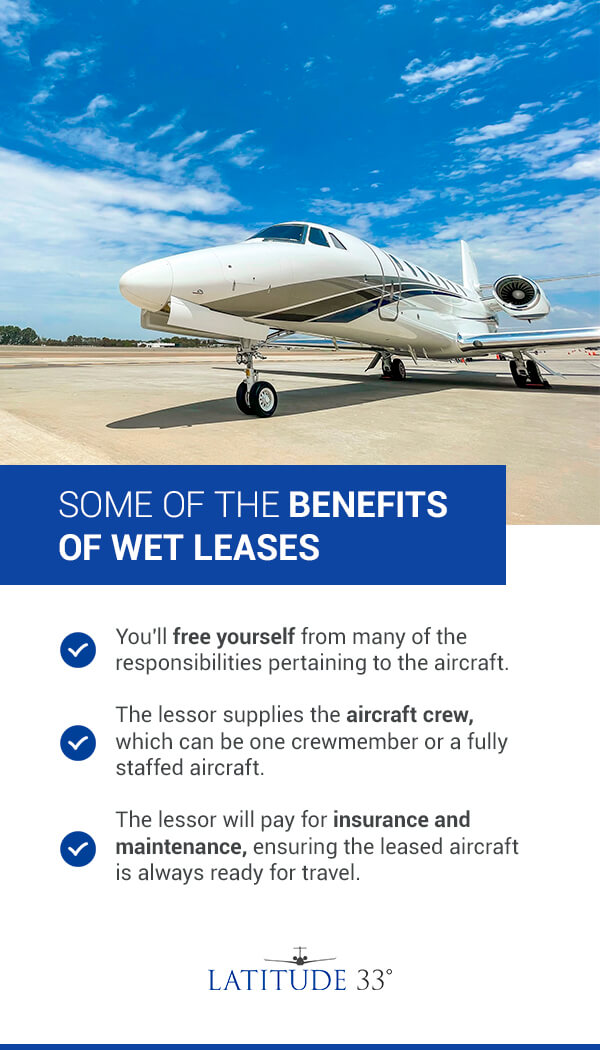 The Pros and Cons of Wet Leases

First, let’s look at some of the benefits of wet leases:

Here are some of the concerns associated with wet leases:

The Pros and Cons of Dry Leases

Dry leases have plenty of positives, including the following:

Dry leases also have the following concerns to consider: 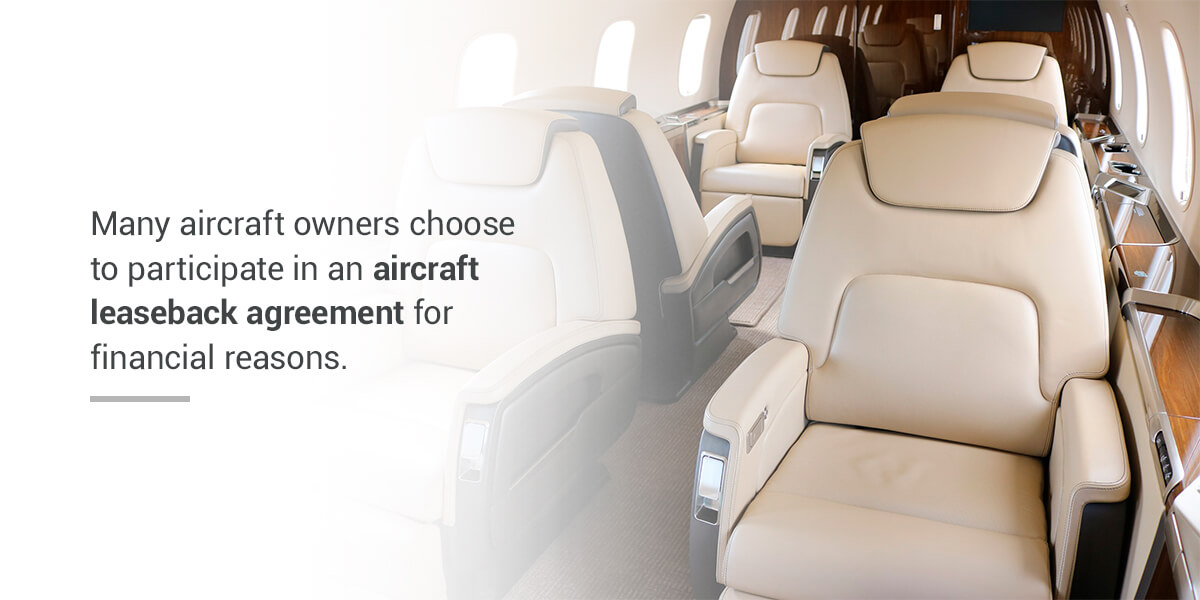 What Is an Aircraft Leaseback Agreement?

Also called a sale-leaseback, an aircraft leaseback is a process in which an aircraft owner sells their aircraft to a lessor who then leases it back to the original owner. This process is advantageous to the original owner, who is now the lessee, because they can continue their flight operations without disruption. In other words, use of the aircraft stays with the same party, but ownership transfers to a new party. The two parties then enter into an immediate lease agreement.

Many aircraft owners choose to participate in an aircraft leaseback agreement for financial reasons. Owning an aircraft is a large expense. Some private jet owners eventually decide that continuing to own a private jet is economically unsustainable. Selling an aircraft can provide the owner with a cash infusion and free up a sizeable amount of expenses in the monthly or yearly budget. They then use a fraction of the money saved to lease the aircraft back from the buyer.

In this scenario, the original party maintains the use of the aircraft while giving up many of the responsibilities and costs that come with owning it. Some examples of parties that may consider aircraft leaseback agreements include flight schools, charter operators, and Fixed Base Operators (FBOs). An aircraft leaseback agreement is a unique situation that comes with the following specific benefits: 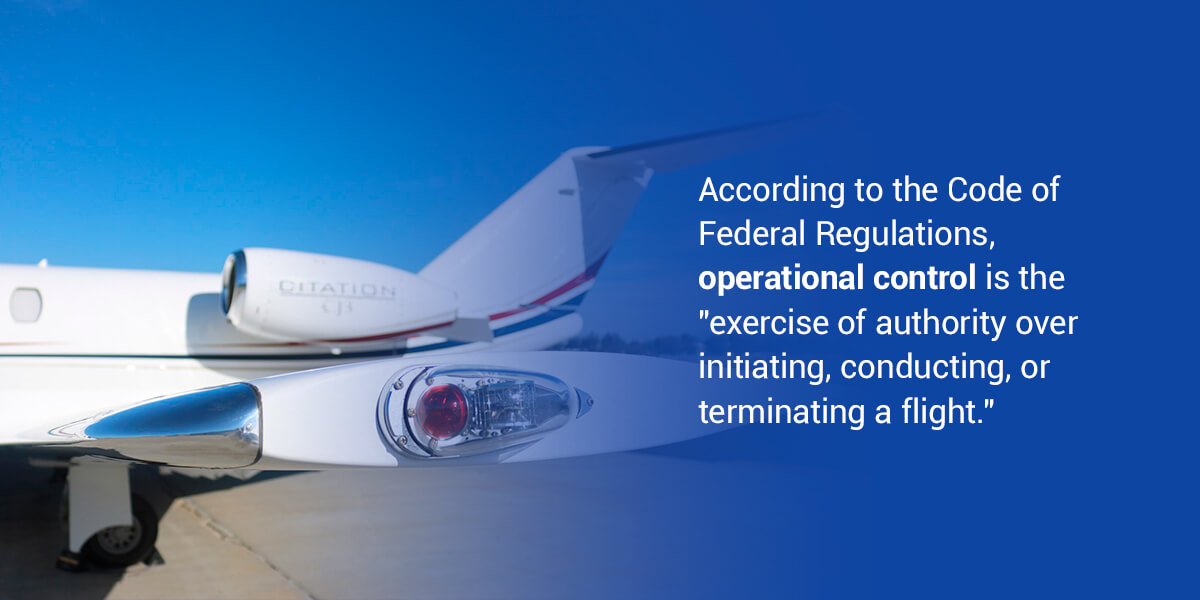 Who Exercises Operational Control in an Aircraft Lease Agreement?

We’ve mentioned the term “operational control” several times in the sections above. Now it’s time to acknowledge the importance of this term as it relates to the various types of private aircraft leasing agreements. According to the Code of Federal Regulations, operational control is the “exercise of authority over initiating, conducting, or terminating a flight.” In other words, defining operational control in an aircraft lease agreement answers the questions of who has control to begin, conduct, and conclude a flight with the leased aircraft.

The FAA has created Truth in Leasing guidelines to help both parties involved in an aircraft leasing agreement understand who has operational control. FAA inspectors also use these guidelines during inspections to ensure the leasing structure is legal and that both parties are compliant. These guidelines ensure leases are legal, truthful, and followed by the involved parties. 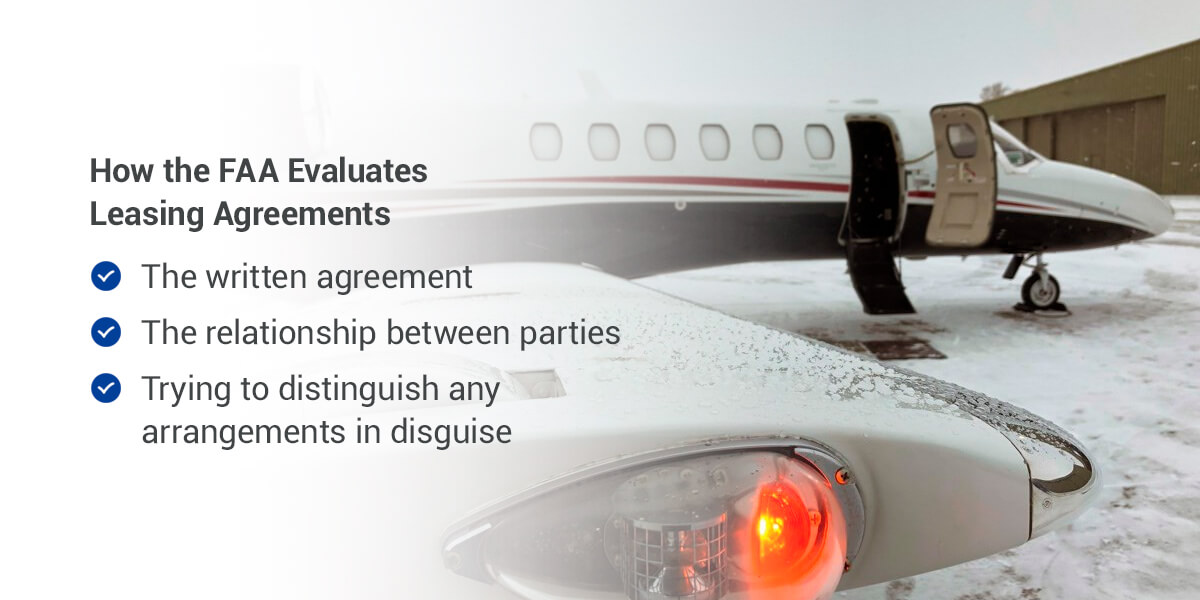 How the FAA Evaluates Leasing Agreements

The FAA is the party that evaluates leasing agreements. This organization ensures that both parties involved with a leasing agreement are following the rules and the law. With the various leasing options available, it’s possible for individuals or organizations to manipulate the boundaries of these agreements and commit unlawful acts. This behavior can have serious consequences, which you can read more about in the next section.

To ensure you stay compliant with the FAA, here are the three levels to how the FAA evaluates leasing agreements: 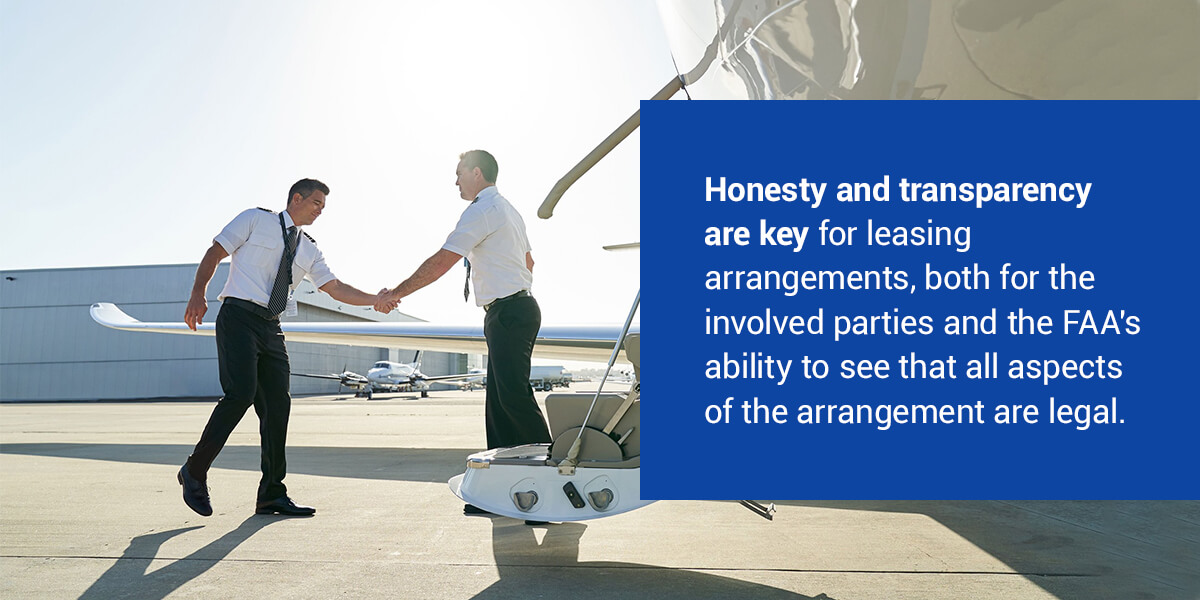 What Are the Consequences of Violating Aircraft Leasing Regulations?

Both the lessor and lessee must do all they can to ensure they are following the FAA’s regulations when they enter a leasing agreement. Honesty and transparency are key for leasing arrangements, both for the involved parties and the FAA’s ability to see that all aspects of the arrangement are legal. But the unfortunate truth is that some entities will purposely circumvent FAA regulations and rules, which is why the FAA has to be so strict about their evaluations in the first place.

The actions a party can take to get around the FAA’s regulations can be mild or severe. Either way, these actions are illegal and can put lessors and lessees in difficult legal situations. Some examples of illegal actions regarding aircraft leases include the following:

If the FAA finds anything illegal in the leasing arrangement, severe consequences can follow. These unlawful actions can include illegal character operations that can tarnish one’s reputation in the private aircraft industry. The FAA can also issue fines for illegal activity. In a more practical sense, violating aircraft leasing regulations such as providing insurance in a wet lease can lead to greater expenses in the event of an accident that damages the aircraft. 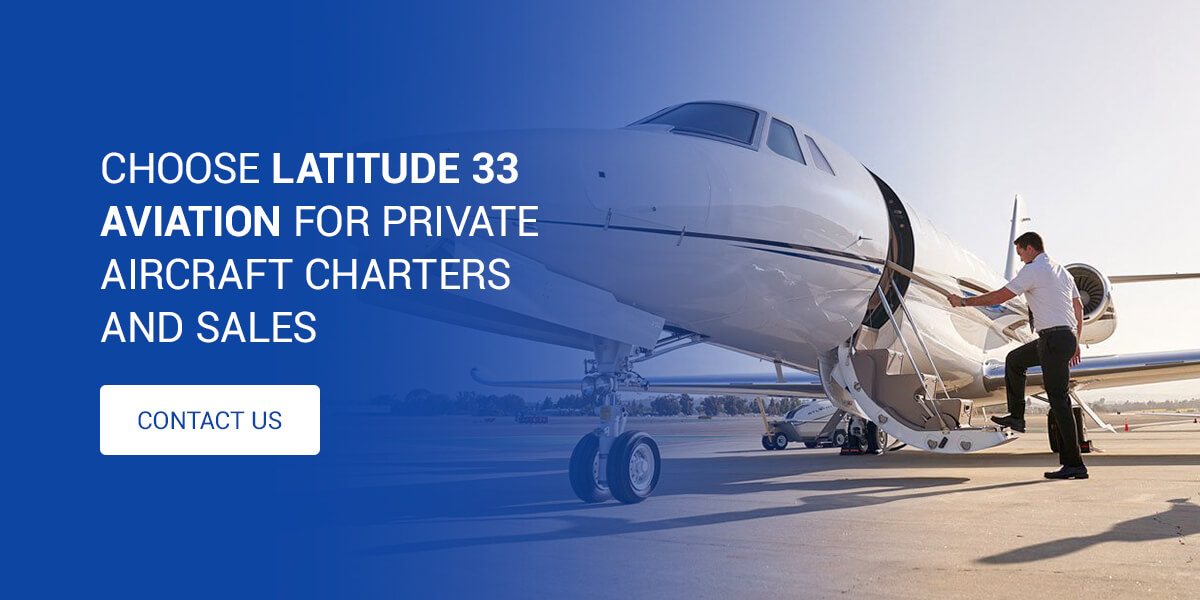 Make sure the company you’re chartering a private jet from manages safe aircraft and follows all FAA regulations. Latitude 33 Aviation has the resources and expertise to get you the private aircraft you need with the peace of mind that all laws and regulations are being followed. We specialize in providing luxury flights in various sizes for all our clients. When you need a private aircraft for business or leisure, you can trust us at Latitude 33 Aviation.

We invite you to contact us today for more information. Or, request a quote and get started finding the charter aircraft for your needs. We look forward to serving you.

Part 91 and 135 Operations: What Makes Them Different?

Understanding Aircraft Sales and Use Tax

A Guide to Aircraft Interior Refurbishment